Wondering if you’re normal? The answer is probably yes.

Katherine Brown is Corona’s 2015 summer intern. She has one year left at Macalester College where she has chosen to study anthropology because it gives her an excuse to talk to people from all over the place and call it work. After living in Germany for a calendar year and Turkey for an academic one, Katherine is able to pass for a German and haggle for coffee sets in Turkish. She’s also well on her way to writing a senior thesis about the huge German Turkish population. When she’s not busy looking for people she’s never met to tell her about their lives in detail, she’s likely spending time with some portion of her Denver-based extended family in restaurants, the mountains, or both.

Wondering if you’re normal? The answer is probably yes.
Written by Katherine Brown

Early this summer in the midst of looking for jobs and internships, I decided to make a documentary about my extended family. When I mentioned this idea to my eighteen year old cousin, she immediately wanted in. Since I’m all about teamwork and she’s more like a sister than a cousin to me anyway, it didn’t take much convincing at all before we were a small team of two.

Our first (and, I will add, 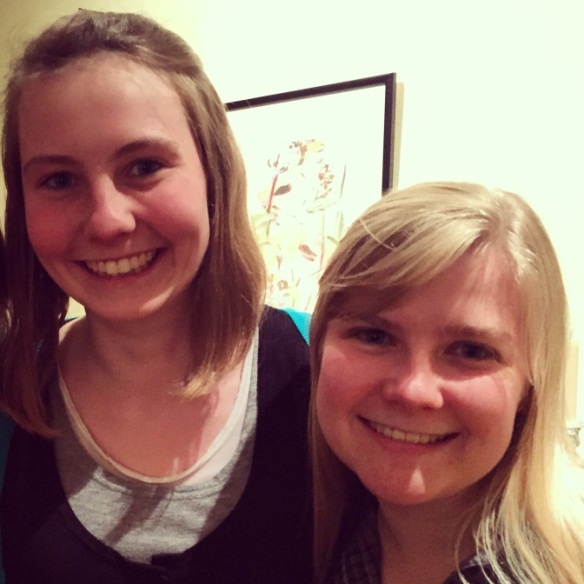 only) meeting was a discussion of how to start the project. It’s hard to make a documentary about your own opinionated and very close family without offending anyone. We decided the best thing to do would be to write up a short questionnaire, send it out to the family, see where people had strong opinions, and go from there. Coming from an anthropology background and hours of training on how to frame questions, how to stay neutral, and how to make people comfortable enough to share information, coming up with five questions for my family seemed like nothing. “What are the biggest generational gaps?” “Do you see major points of contention? What are they?” I wanted to look for patterns, anything we could latch onto and say “YES! That’s it! Let’s dig deeper there!” My cousin, who just graduated from high school, was set on a different approach. She felt that it was crucial to know just one thing.

“Is our family normal? Why or why not?”

It took me a while to figure out why this one question seemed so crucial. Maybe she was looking for someone to confirm her suspicions that our family is not normal. Maybe she wanted everyone to tell her that we are, in fact, normal and that she didn’t need to worry. I mostly just put it off to the fact that she hadn’t had the training in asking questions that I have.

A couple of weeks later, I started working at Corona as an intern for the summer. By then, I’d more or less forgotten about the incident with my cousin. My life became filled with interviews and survey data. It wasn’t until this week that I had a chance to step back again and think about my cousin’s question. Apparently all of this first-hand exposure to research has been teaching me something, because I suddenly understood why she had been so focused on the question of normal. She knew what we were really trying to get at through this documentary.

Through my coursework and experience interviewing people, I’ve always focused on the process. It never occurred to me that all the data analysis (whether from surveys or interviews or focus groups) I’ve done is really just a quest to find “normal”. Of course, each data set is slightly different, focusing on finding normalcies among slightly different populations. But no matter what kind of data I am looking at, people love to emphasize their own ‘normalness’.

In my academic research on German Turks, many interviews will start with people telling me that they are “not really the kind of person I’m looking for”. Their story is different from the ones I’m used to hearing because they don’t come from Eastern Anatolia. Or because they “did not have a choice when they moved to Germany”. Or because they “didn’t even move back to Turkey on purpose”.  And yet, in each interview I hear more or less the same thing. The details are different, of course. But there are notable patterns in what people emphasize when I ask what it means to be a German Turk. These people who present themselves as unique or abnormal almost always end up giving me details about how they are just like all the other German Turks. I hear “Anyone who has had experience in Germany will tell you that…” in almost every interview, including the ones that begin with the phrase “I’m not really the kind of person you’re looking for”. Those normal habits of abnormal people are exactly what I’m looking for when I’m building my senior thesis. Those habits are the ones that matter.

My exposure to qualitative research at Corona has shown me similar results, albeit without the introductory phrase of “I’m not the right person”. Research here is often conducted to find out people’s opinions. I’ve noticed that most people believe that their own ideas are also the most widely-held opinions, the ‘normal’ opinions. Answers to an interview question sometimes begin with pauses implying how ‘obvious’ the answer is going to be. In the next interview someone may pause for the same reason, then completely contradict the last person’s answer. What I’ve learned from this is that everyone is normal. Everyone knows the ins and outs of their industry. Everyone knows what everyone else thinks. At least until you talk to everyone else.

Even quantitative survey data allows room for people to remark upon their normal lives. People will circle survey questions and comment “why are you even asking this?”, either forgetting or oblivious to other people’s perceptions of normal. In open ended responses people will write that they do “the normal things” or go somewhere “right next to where you get off the train”. That version of normal may or may not be the same as mine. Many of these people are filling out the surveys quickly, and do not remember that they’ve never met me. Why would any one person’s experience be anything BUT normal?

I will spoil the end of the unfinished family documentary.  Everyone in my family responded that we are normal. Their responses to my open-ended, non-judgmental, broad, neutral questions varied pretty greatly. And yet, there were patterns. In my experience, following those patterns would lead to a pretty representative profile of a ‘normal’ family with the same education, socio-economic status, geographic location, and generational breakdown as my own. On her quest to find normal, my cousin may be beginning to realize that everything and everyone is normal. On my quest to become a better researcher, I’m beginning to realize that what I’m looking for is the answer to the question my cousin was so set on asking.