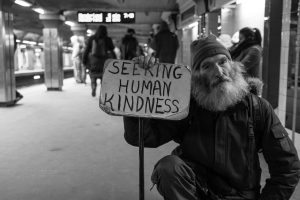 Photo by Matt Collamer on Unsplash

If you have walked through downtown Denver recently, you know that it is hard to miss the growing homeless population. Civic Center Park has become a meeting place for many in the homeless population—a place where they can gather to share stories, food, and cell phones.  Each year, Denver conducts a “Point in Time” (PIT) survey that aims to count the number of people experiencing homelessness. The US Department of Housing and Urban Development (HUD) conducts an annual Point-in-Time (PIT) survey to track the rate of homelessness across the nation. Individual cities are responsible for collecting the data, with assistance from Local Homeless Coalitions, and provide the data to HUD, as well as publish a local report. In Denver, the Metro Denver Homeless Initiative oversees the PIT survey. The 2018 Denver PIT survey found that 5,317 people are experiencing homelessness in the city and county of Denver, competing for a total of approximately 1,000 emergency shelter beds (MDHI 2018). This number is up from the PIT count of 3,336 homeless persons in 2017.

Over time, the city of Denver has taken various approaches to “solving” the issue of homelessness. In 2003, the Denver Department of Human Services published a report titled “A Blueprint for Addressing Homeless in Denver” which outlined a ten-year action plan aimed at ending “chronic homelessness in Denver that will also address homeless prevention and the enhancement of services for populations with special needs” (Denver Homeless Planning Group 2003: 4). In 2005, Proclamation 53 was signed by then-mayor John Hickenlooper, expressing official support for Denver’s Road Home program—an initiative to secure housing for the city’s homeless population. Despite these, and other, city initiatives the homeless population in Denver continues to grow and housing costs surge past national averages. While the numbers may seem bleak, one Denver non-profit has followed the path laid out by other major cities such as Seattle, WA and Austin, TX and searched for an innovative solution. This solution came in the form of tiny houses.

Tiny homes burst onto the scene in the early 2000s. Small, sometimes mobile, homes with sleek designs offered a minimalist housing solution to people seeking a break from the materiality of the modern world. In Denver, tiny homes are now being used to provide a safe housing solution for some of Denver’s homeless population. Beloved Community Village, located in Denver’s River North (RiNo) district, consists of 11 tiny homes, housing up to 22 people. The self-governing community opened in July 2017, operating as a 180-day pilot project. In January 2018, Beloved Community Village was forced to relocate after their six-month lease with the Urban Land Conservancy expired. Luckily, the community was able to relocate only 200 feet away onto another property owned by the Urban Land Conservancy. Unfortunately, the Urban Land Conservancy and the city of Denver have only officially approved another 180-day lease agreement for the tiny house village, leaving the permanency of Beloved Community Village in question.

According to Beloved Community Village website, the village’s purpose “is to provide a home base and safe place for those who are presently in Denver and have no other place to live. With this collection of secure and insulated homes, we provide a viable solution in the midst of the current housing crisis.” While Beloved Community Village has been successful thus far in living and embodying their purpose, one has to wonder whether the tiny home model can be expanded to accommodate even more homeless residents in the Denver-metro area and throughout the state of Colorado. In May 2018, the organization behind Beloved Community Village, the Colorado Village Collaborative, revealed they are actively working to open another tiny home community at St. Andrew’s Episcopal Church in downtown Denver. The new village will have eight tiny homes, designated specifically for women and transgender homeless residents.

Affordable housing remains a crucial need in Denver and across the nation, as housing costs continue to rise and wages continue to stagnate. Cities and towns must face this problem head-on and work to understand how and why their communities are affected in order to develop strategies and initiatives to tackle homelessness. Homelessness is only one problem though and does not exist in isolation, thus cities need to ensure they understand the greater context and vulnerabilities unique to their community. The issues involved span everything from zoning laws and development to population growth and migration to mental health and criminal justice services. In 2016 and 2017, Corona Insights conducted a needs assessment for the city of Longmont. The research found that some of the greatest needs facing community residents are the ability to find affordable housing options and in turn, paying for housing. Furthermore, between 2010 and 2014, the availability of rental properties with a monthly rent below $800 decreased by 33%. The completion of the needs assessment and its subsequent report in Longmont equipped the city government with knowledge to better meet the human service needs of their residents.

Homelessness is a pervasive issue in many urban centers and rural areas across the country, with no end in sight. Local governments and non-profit organizations both have roles to play in addressing homelessness. Communities and organizations interested in addressing homelessness may benefit from commissioning a community needs assessment to uncover systemic challenges in their local area, and committing to enact changes informed by the assessment findings.  Armed with information and compassion, we can begin to dismantle the barriers that lead to homelessness. The time is now.