The Race to the Rockies – Colorado Migration Part 1

I admit, I am one of many in the horde of people who have recently migrated to Colorado. Indeed, there are tens of thousands of us moving here each year at one of the highest rates in the country. But who really is “us”? Who are the people moving into Colorado in droves? This blog will be part 1 of a 2-part blog series exploring who is moving into Colorado. In this first blog, we’ll be looking at generational migration patterns over time and migration by race and ethnicity.

Utilizing the Census Bureau’s Population Estimates for 2010 to 2015, I broke this question down by two basic demographics, age and sex. In the following graph, generations were grouped roughly using Pew Research Center’s definition for each generation.­1 Each generation has net migration (those moving to Colorado minus those who left) graphed from 2011 through 2015. 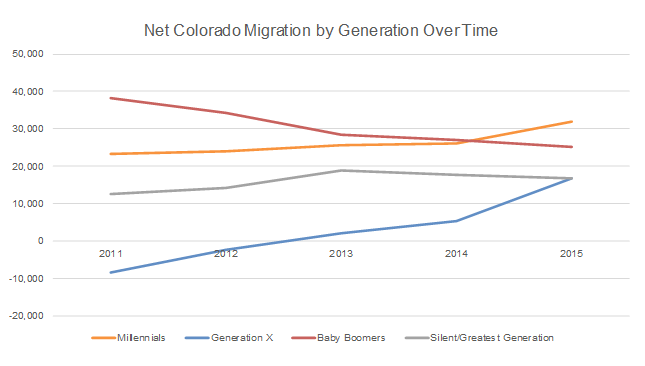 Millennials, on the other hand, have been consistently moving into Colorado, with 2015 seeing a strong increase in the number moving into the state. They are also the only generation which show a substantial difference between genders, with about 4,000 more males moving into Colorado than females in 2015. Needless to say, as a male Millennial who has moved into Colorado, I am thankful to already be married.

Race and Ethnicity Movement in Colorado

Using the same data source (Population Estimates), I looked at those moving into Colorado from 2010 to 2015 by race and Hispanic/non-Hispanic ethnicity.

The total percentage change in population from 2010 to 2015 was 8.5%, making Colorado the third ranking state by population growth rate since 2010. When looking at percentages, many Native Hawaiian and Other Pacific Islanders appear to be moving into the state, though 2015 saw an increase of only about 2,000 since 2010. Many Asians have also been moving into the state, with there being a 22 percent increase equating about 30,000 new residents. Those who identify as multi-racial have moved into Colorado at similar numbers.

1 Due to the data available in the Population Estimates tables, some generations in the graph includes ages +/- 1 or 2 years from Pew’s definition, and the Silent Generation was combined with the Greatest Generation. The graph also doesn’t include those 19 and younger, though the age cutoff between Millennials and the following generation has not yet been determined.