The Challenges of Measuring Home

Home has many different definitions, both physical and conceptual.  It is where the heart is, according to Pliny the Elder, or it’s where you keep your stuff according to George Carlin.  It’s a structure, a family, a memory, or just anywhere you feel comfortable.  Or maybe it’s all of these things.

I spend a fair amount of time on the road, traveling for work or for pleasure.  While my true ‘home’ is certainly Denver and my house and my wife, I fall into the camp that believes that ‘home’ can exist in other places as well.  If my stuff is there and I’m sleeping there, it’s home, even if it’s just for a night.

I started thinking about where these temporary homes have been, and decided to do an analysis of it, because, you know, that’s who we are here at Corona Insights.

Like most data analyses, the question becomes more complicated once you start measuring.  The first issue is scale.  What am I measuring?  Is it as specific as a hotel room?  The hotel itself?  The city?  The state?  If I measure actual hotel rooms, the data is so detailed that it’s not particularly useful.  And if I measure it on a state level, then I omit a lot of overnight trips in Colorado where my ‘home’ for the evening was not in Denver.  I needed to define my research goal to answer this question.

The second issue is how I classify data.  It seems like measuring where one spends the night is easy, but is it?  I’ve spent some nights on long-distance flights, so is ‘home’ the destination, the origin, or the plane itself?  The same question arises on overnight train trips.  Was my ‘home’ in the state where I went to bed or the state where I woke up or the state where I spent the most sleeping hours?

And ships make things even more complicated.  I’ve slept on ships in international waters, ferry boats plying coastal waterways, and cruise ships docked in port.  What are the rules?

The third issue is developing and verifying a data source.  In this case, I frankly relied on a very healthy memory for trivial facts and a couple of calls to my parents.  Sure, I could dig out 50+ years of receipts, but in this case my research goal was to develop a good overview.  I could be quite accurate just based off memory and a very structured system for testing that memory, even if perhaps my precision isn’t perfect.  Do I remember if I spent 8 nights in Madagascar or 10?  No, not really.  But that’s not necessary to achieve my big-picture goals.

Like any data analysis, one has to define rules for classification, stick with them, and document them.  So I pondered my goals, and decided on the following rules:

So in summary, it seems really straightforward to measure where you spent the night, but you still have to define rules to deal with ambiguity.  If spending that night requires a half-dozen rules, one realizes the extent to which we have to define rules in our more complex demographic analyses.

After defining the rules, the data collection began.  It primarily involved developing a list of states and nations and then asking myself, “when have I ever been there”?  I also asked my parents a few odd questions, such as, “Remember that time we drove cross-country to Disneyland in 1966?  Did we spend the night in Utah or Nevada along the way”?

The process went relatively smoothly overall, and I present to you below a compendium of every state, nation, and moving vehicle where I’ve ever spent the night (including leap years). 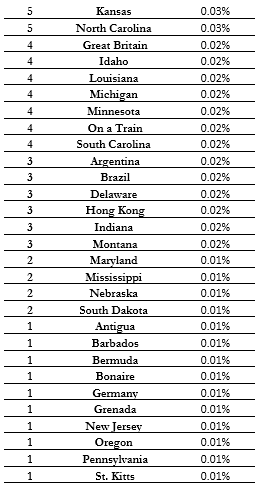 And to make it easier on the eyes, here’s a map, courtesy of Matt Bruce. 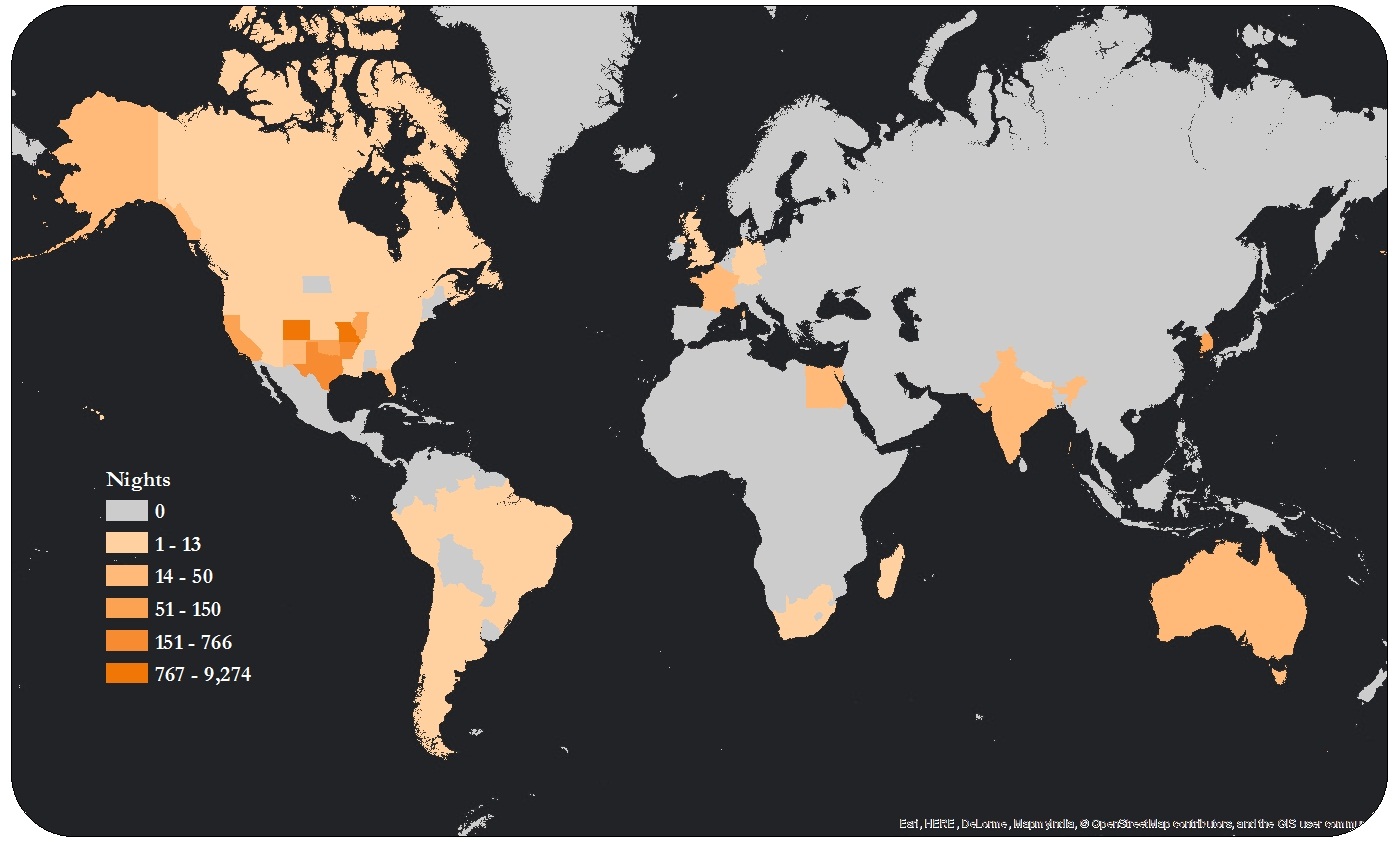 So what did I learn from this?  Aside from recognizing that I like to analyze things a little too much, I learned several things, with the following highlights.

And that conclusion about liking to analyze things too much?