If you have been following our series of Trivia Crack scoring analyses, you may be wondering how we developed our estimates.  It’s actually an interesting process, and it plays into our strengths here at Corona Insights, of measuring a population when we can only gather data for a sample.  So let’s take a quick break from the scoring analyses and talk a little about how we did it.

The Challenges of Measuring

Trivia Crack offers six scores for each player, one each for history, geography, science, sports, arts, and entertainment.  Scores range from 0 to 100, and reflect the percentage of questions that a person has answered correctly.  We can also calculate a total score by adding the six scores together.

However, it’s not that easy.  We don’t have access to the master database, and there are four big challenges in measuring scores if your only way of gathering data is by playing the game.

So How Did We Measure?

First off, we played a lot of games, always against random opponents, and then we entered their scores into a database.  That part was easy.  We also set a rule that we would not include a person’s score in the analysis if they hadn’t answered at least 300 questions.  While somewhat arbitrary as a threshold, this requirement eliminated a lot of the random variation that comes when people answer only a few questions.  We eventually gathered data on 392 players, which was enough to do a strong analysis.

The last correction is a little more complex.  We did an analysis and found out that the most frequent players tend to have higher scores.  In general, every 1,000 questions answered equates to about a 1 point gain in each of the categories, or 6 points in total.  This can throw our numbers off because we’re more likely to encounter high-frequency players when we draw a random opponent, which will then overestimate the scoring of a typical player.

To correct for this, we statistically weighted our data to account for the fact that more frequent players are overrepresented.  The scores of each player in our database were weighted according to the inverse of the number of questions they’d answered in their Trivia Crack career.  Players who have answered more questions are more likely to be randomly drawn because they play more often, so we weighted them down in inverse proportion to the number of questions they have answered over time. 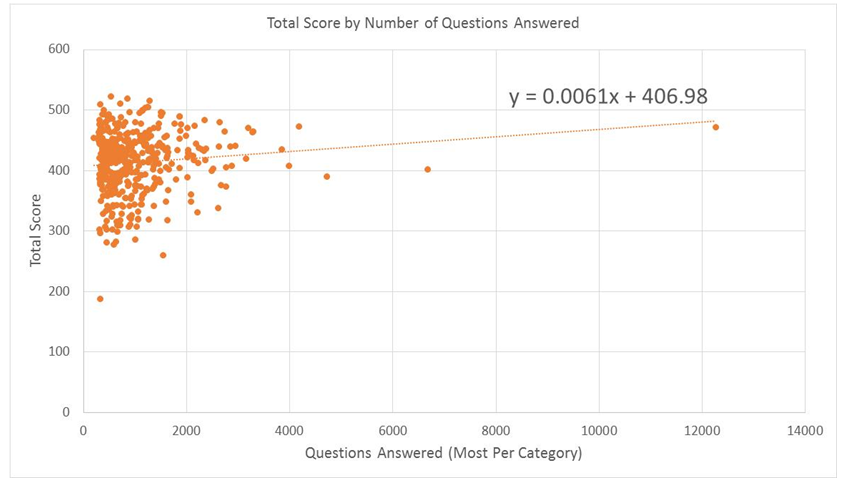 In summary, it’s a more complicated analysis than simply drawing random opponents and looking at their scores.  But we developed some systems to do these corrections, and that made the process easier.  And by the way, kudos to the fellow in our sample who had answered over 12,000 questions per category.

One thing you will notice in all of the category analyses is a bit of a jagged pattern – a sawtooth.  We figure that those would smooth out if we gathered information on a lot more scores, but hey, we have to earn a living.  We can’t just be playing games all day.

So enough about methodology.  Let’s get back to the scoring.

Check out our next scoring analysis, the fun topic of Entertainment questions.