The Wages of Engineering Grads

In two previous blogs (Once an Engineer, Always an Engineer? & The Career Evolution of Engineers),

we examined the long-term occupational patterns of people with engineering degrees, by looking at a sample of 1,250 Colorado residents who hold bachelor’s degrees in engineering.

We conducted an analysis of pay by occupation and degree type (engineer/non-engineer) to explore this issue.  In order to develop as close a comparison as possible, we considered only full-time workers (40+ hours per week) in Colorado who reported making more than minimum wage and who hold a bachelor’s degree or higher.  This eliminates workers in family businesses, entrepreneurial startups, retired people, and workers who choose to work less than full-time.  By limiting the analysis to people who hold college degrees,  we also provide a comparison of the value of an engineering degree against other degrees in fields other than engineering.

So we can now address the question of “Is an engineering degree portable if a graduate decides not to pursue engineering as an occupation?”

The following exhibit shows the mean wage of full-time degreed workers in different major occupational categories.  Partway down the table, we see that full-time engineering grads working in engineering occupations have a mean income of slightly less than $106,000 per year.  We can draw several other conclusions by comparing this figure to other occupations. 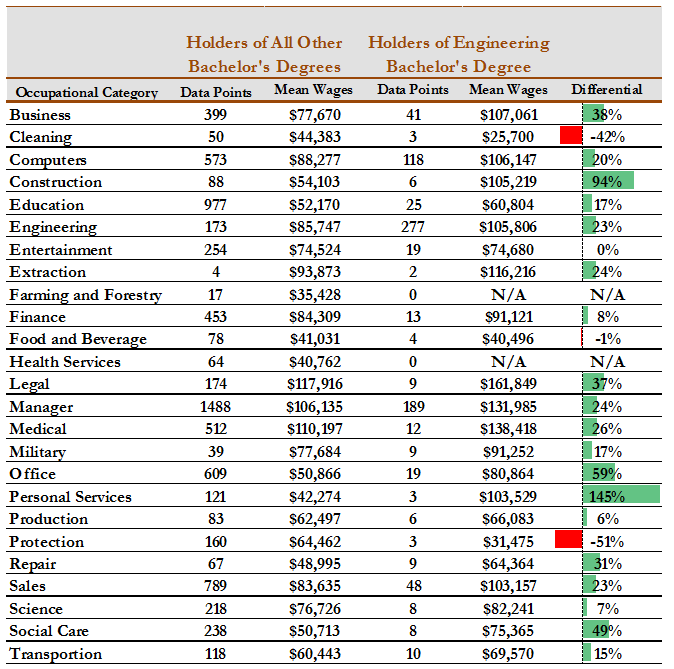 While the available data are very limited in numbers in many cases, we can still see patterns.

So what conclusions can we draw from this?  For people like myself who have left engineering careers, and for others who are considering leaving the field, the results are heartening.  We can conclude that engineering degrees are highly portable to other fields.  In many fields, an engineering grad can completely replace his or her engineering income, leveraging those skills in new arenas.  And even if an engineering grad decides to pursue a field that pays less than engineering does, the degree itself is still a good thing, rewarding them with higher earnings compared to our peers in the new profession.

Overall, it appears that you can’t really go wrong with an engineering degree, so I’ll continue to display my diploma proudly.